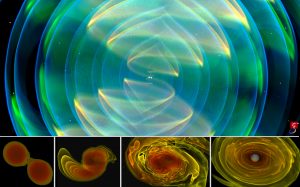 Due to the Covid-19 pandemic the 2021 spring school was canceled.

The Max Planck Institute for Gravitational Physics (Albert Einstein Institute) offers a crash course on General Relativity, Black Holes and Gravitational-Wave Astrophysics. This course can be attended by students studying from the 5th semester Physics or Mathematics.

The spring school will first introduce general relativity; we will then discuss black holes and neutron stars; the final section will be about gravitational waves, and will cover in particular the recent discoveries of merging black holes and neutron stars which were awarded the 2017 Nobel Prize of Physics. Our institute was involved in these discoveries, and we also give insights into current research at the institute, both related to gravitational waves and beyond.

Lectures will take place daily during the morning. In the afternoons, we provide exercises and the opportunity for questions and discussions. We also plan two excursions to sights in the vicinity of Potsdam.

The 20th Jürgen Ehlers Spring School takes place at the Max Planck campus in Potsdam. Potsdam is the capital of the state of Brandenburg and hosts multiple UNESCO World-Heritage Sites. It lies in close proximity to Berlin.

Information on how to get to the Max Planck campus in Potsdam can be found here.

A working knowledge of introductory university physics (classical mechanics, electromagnetism), and mathematics (advanced calculus, linear algebra) will be assumed. Some prior exposure to differential geometry is desirable but not required.

Week 1: Introduction to General relativity and the theory of black holes

The first week’s lectures will be devoted to the study of Einstein’s theory of General Relativity and the theoretical foundations for black holes and neutron stars.

Introduction to general relativity and the theory of black holes